My career in Aluminium Extrusion

‘That’s me in the front with my white cardigan on looking so young! 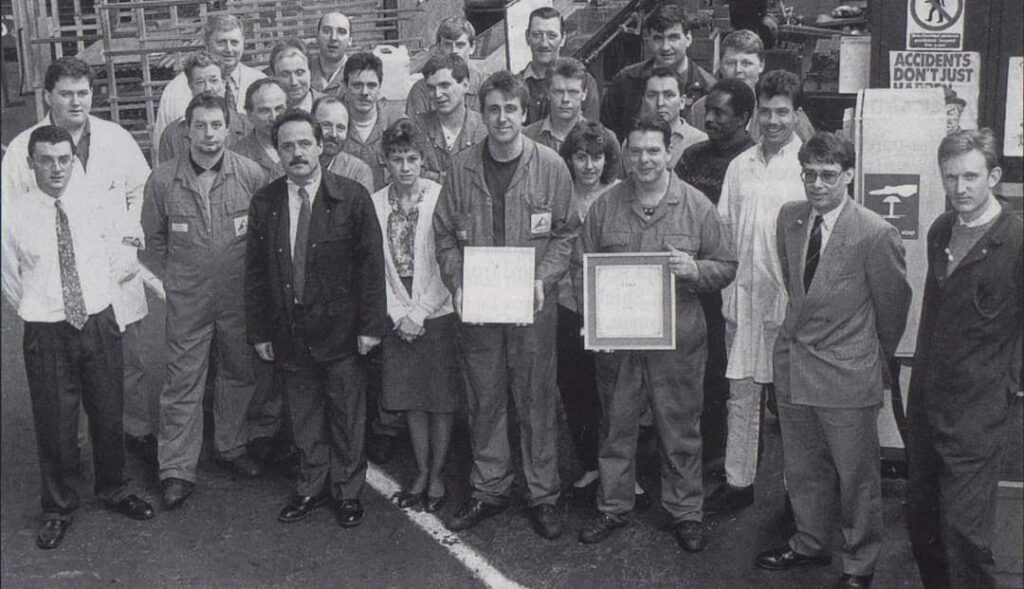 So a little about my background for you…..

After a year at catering college (despite meeting Gordon Ramsey before he was famous) I realised that wasn’t a path I wanted to follow I found myself in the local careers office. ‘I think I want to work in an office’ I told them and it was then I was told about the government Youth Training Scheme (YTS)

The Aluminium Factory in Banbury had been there since 1931 and was steeped with history playing an important role during the war making sheet for the Spitfires. It was a target for the Germans and so a dummy factory was built just up the road and they fell for it as it was bombed. So the ‘Northern Aluminium Factory ‘ as it was then remained and for many years to come producing Aluminium from Banbury. In 1985 it was owned by ‘Alcan’  and I wrote an application to the Personnel department and was accepted on the YTS scheme. I was paid £30 weekly £5 of which went to my Mum! and had to go to college one day a week for business course.

I was placed in the scheduling and sales office during this time and I learnt about making sure the Aluminium extrusion presses had the right amount of work to keep the factory going. Each day I had to walk around the shop floor and count up how much work they had done and collect the press log. Inputting the information into the antiquated computer system when I returned back to the office. Walking around all the men in the factory was quite daunting at just 17 but I soon got used to it. I distinctly remember one day I slipped on some oil near the press and split my skirt all the way to my hip! The guys on the press promptly helped me to staple it up so I could get out with my dignity still intact.

A few months into my YTS programme a job came up in the scheduling office and I got it. This was the start of my career in Aluminium Extrusion. From there I moved on to Inside Sales where I was dealing with the customers on the phone. In 1991 Minalex came to the Banbury factory a miniature extrusion press from Gloucester and I saw this as a new challenge and decided to join them.

Minalex was selling to a completely different market sector the focus being on small, intricate extrusions with tight tolerances.

A few years later a position became available as an ‘Account Manager’ to which I was successful. Now I had a company car and travelled around the country visiting the customers and hopefully increasing the company’s sales of extrusions. Alcan became Alcoa and eventually Sapa but it was always fondly known as ‘The Ally’  and still is to this day. I spent 15 years at the Alcan and then went on to work for another Aluminium Extruder in Corby again as Account Manager. After 4 years there I worked for one of my customers which didn’t really suit me as I preferred to sell the Aluminium extrusions than the finished product.

I then worked for an Aluminium stockholder which introduced me to other Aluminium Extruders in Europe and made me realize how it was possible to buy in extrusion and sell it on in the UK. From there the idea of setting up my own business was born and in 2005 I took the plunge, resigned from my job and found myself sitting at home with a phone at my kitchen table.

This was probably the most daunting time but I knew I had made lots of contacts over the years and persevered.

Now 14 years on I can honestly say it’s the best thing I ever did.’

If you are interested in what you’ve heard so far, then check out the product pages on site for more information. And if you still have any queries, or would like more information about our stockholder services, don’t hesitate to email us or call Jackie Kelly on 0333 4560121 to discuss your individual needs and requirements.